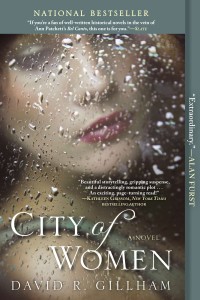 It is 1943—the height of the Second World War. With the men away at the front, Berlin has essentially become a city of women.

A seamless blend of history and fiction, Gillham’s debut novel, City of Women, takes readers to wartime Berlin where it explores the transformation of a seemingly obedient German soldier’s wife.

On the surface, Sigrid Schröder is the model German soldier’s wife: She goes to work every day, does as much with her rations as she can, and dutifully cares for her meddling mother-in-law, all the while ignoring the horrific immoralities of the regime.

But behind this façade is an entirely different Sigrid, a woman of passion who dreams of her former Jewish lover, now lost in the chaos of the war. But Sigrid is not the only one with secrets—she soon finds herself caught between what is right and what is wrong, and what falls somewhere in the shadows between the two . . .

In this page-turning novel, David Gillham explores what happens to ordinary people thrust into extraordinary times, and how the choices they make can be the difference between life and death.

PRAISE for City of Women
“I can’t wait for Gillham’s next novel—play it again, Sam.”
—Stephen King

“The writing is a great mix of the literary and commercial, page-turning and suspenseful, with a morally complex, intelligent heroine at its center. If you’re a fan of well-written historical novels in the vein of Ann Patchett’s Bel Canto, this one is for you.”
—Slate

“A thriller of searing intensity that asks the most urgent of questions—how to love, who to trust, what can be saved in the very darkest of times. . . . Utterly compelling.”
—Margaret Leroy, New York Times bestselling author of The Soldier’s Wife

“A moving and masterful debut . . . Powerful and piercingly real. You won’t soon forget these characters.”
—Paula McLain, New York Times bestselling author of The Paris Wife and
Love and Ruin